A selection from Brasseurs de Montréal

A few quick notes for a few beers I tried in July.

I had this a couple of hours after tasting twelve different beers at the Laval beer festival (here and here) earlier in July.  It’s not generally a good idea to try beer tasting when already quite drunk, but I wasn’t too badly off at this stage so I thought ‘why not?’  I don’t have any notes on this, but from memory it was a decent amber ale.  I gave it the standard 5/11 for being ok, for the price, accuracy, drink-again-ability and recommend-ability. 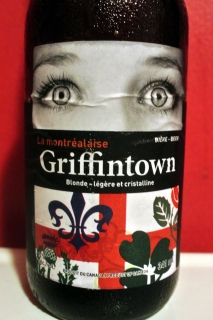 I tried this light blonde ale at home a few days after the Rebelle and it got me thinking that maybe the Rebelle deserves another tasting – but I don’t think I’ll bother as it may only get one more Yes, which still wouldn’t put it up there with the best beers.  This is a pretty good blonde ale that made me think more of a lager than a blonde.  I have no notes on this one either except for the score – 6/11, for being good, worth the price, accurate, for drink-again-ability, recommend-ability and an extra Yes for going a block out my way if the mood so took me! 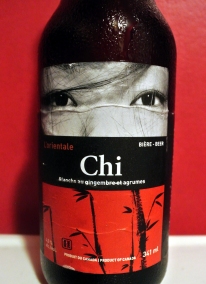 This is the real treat of the selection.  I’ve been flirting more and more with spicy and sour beers recently and I think that this was the first one that I actually really liked.  The aroma reminded me of green tea – but there are strong hints of ginger and some fruits in there too.   It was very fizzy on the tongue and the spiciness came through in the taste nicely.  Everything about the taste was just right.  It was not too spicy.  It had just enough of a hint of green tea.  It had just the right fizz to be refreshing.  It gets a 7/11 for being good, worth the price, accurate, different, for drink-again-ability, for recommend-ability and for the fact that I would possibly go out of my way to find a bottle.

This was a little disappointing, I’m always wary of light red ales.  And rightly so in this case.  It had a good aroma to it but the taste, although an obvious red ale, was a little bland.  It made me think of having a watered down beer in a bar.  It gets 3/11, for not being bad, for being cheap enough and for the description (just about).