As it’s almost a year since I went back home and tried 16 different beers in seven days and as I will be going back there quite soon, it’s finally time to put a few notes up about the other beers I tried there last year.  Here’s a link to my first post.

The picture is a bridge over the Six Mile Water at the Castle Grounds, Antrim, the other pictures are not of the same quality due to my increasing level of drunkenness…

I tried this at the Back Shed in Antrim.  I had noticed that it was in a lot of bars the previous year when I went back home but hadn’t tried it,  thank God.  It looks quite classy but doesn’t really taste like much.  It’s a very light feeling lager.  I’m not going to drink it again.  1.5/11 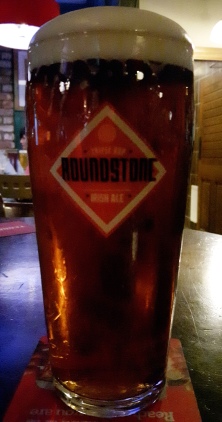 Also tried at the Back Shed, this is also a light beer with very little real taste to it.  I suppose it’s always nice when you get a pint glass with a logo on it. 2/11

This was recommended by a friend working at the bar (Cheers Jonny).  And while I can’t find my notes on it, I do recall it being a decent porter, which wouldn’t be out of place amongst the porters available in Montreal.  It poured a little flat, but still tasted fine.  I would try it again and recommend trying it too.  5/11 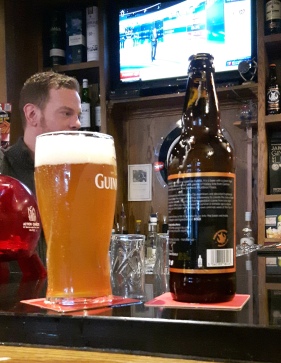 This is an odd beer.

I was unaware of the style ‘California Common’ before so I did not know what to expect.  To be fair, I didn’t really do much research and so am still quite ignorant on the subject, however I am aware that they are often very carbonated.  When I poured this a little it filled the glass and continued expanding.  In fact it kept foaming up for a few minutes to the point that it was impossible to drink.  On trying a second bottle, it was slightly easier to pour but still bubbled up like no beer I’ve ever seen.  So it’s different.  Unfortunately, the taste was not worth the effort of waiting for the beer to settle.  It was quite hoppy initially but very dry and lacked any real bitter aftertaste.  2/11 – try shaking one up!

Suffering for one’s art.  I’ve never liked Tennent’s but I decided to try this again to get the numbers up.  This was quite watery, and lacked taste, but it did keep it’s fizz well and was reasonably refreshing.  3/11

In conclusion, it is very probable that the previous four years of Quebec beers has taught me to expect more from beer.  I still have to write up notes on a few other craft beers I tried at home so I will also summarise my conclusions when I have reviewed them too.